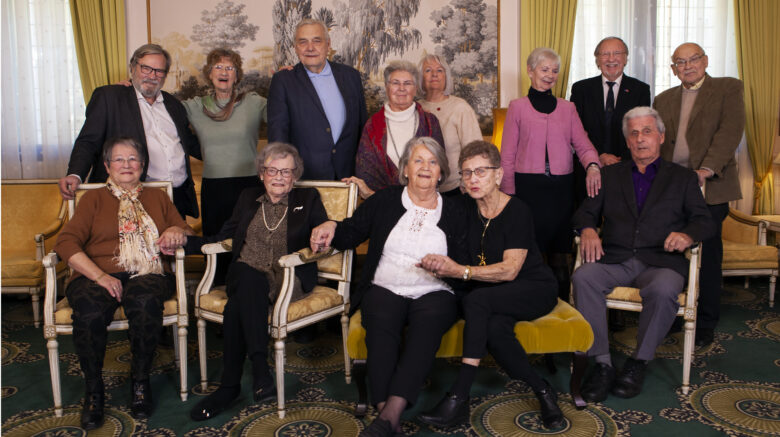 It is assumed that around 10.000-12.0000 children were born to German soldiers as fathers and Norwegian mothers during the five years of German occupation of Norway during World War II. It took 40 years before these children found each other and formed an organization to help each other with research about their origin. They also found the strength to sue the Norwegian government for lack of protection – even taking their case to the Human Rights Court in Strasbourg. While both the Norwegian court case and the Human Rights court case were dismissed due to age, their loud voices and willpower to seek justice led to the Norwegian government funding several research initiatives. These now form the basis of the knowledge on the situation for CBOW. The Norwegian CBOW have also continued to tell their stories, both for press, documentary films and lastly for the mobile game “My Child Lebensborn”.

– I am very happy to be able to present our new foundation, The Children Born of War Project to the CBOW children in Norway, both to thank them for their support and to assure them that the work they have started will continue. Their support for the mobile game has been fundamental to its success, which is now able to fund the new foundation, says Elin Festøy, the producer of the game and founder of The Children Born of War Project.

In addition to the Norwegian CBOW children, the event was also attended by Henny Granum and Arne Øland from the Danish War Child Association (DKBF). As the Norwegian organizations, this is also closing due to the advanced age of its members.

– With this new foundation, we are now able to offer to safeguard any material of the Danish organization that cannot be archived elsewhere. We will also work to gather material on CBOW that is held by individuals and organizations around the world to assure that relevant information and documentation are secured, says Ingvill Constanze Mochmann, managing director and chairwoman of The Children Born of War Project.

– It feels very rewarding to be able to present this work to the now adult Norwegian and Danish war children in person, after having researched this topic my whole career, says Professor Mochmann. Many of the CBOW participating here today have been contributing significantly to our research and it is a great pleasure to be able to ensure them that their legacy will be maintained. The foundation will continue to work for safeguarding the needs and rights for Children Born of War also in future.

The CBOW children were also updated on a new research project, “EuroWARCHILD”, which is led by Professor Inger Skjelsbæk, Director at the Centre for Gender Research at the University of Oslo, and where two young PhD-students are now starting their academic careers with CBOW research. They were also told about the success of the mobile game, which has now sold over 2 million copies worldwide. Teknopilot AS and Sarepta Studio AS are donating over 1 million Norwegian kroner (app. 110.000 euro) to the new foundation.

– This was a really important event for me personally – to be able to gather these “children” once more to honor them for their courage and show how their work has created new initiatives to help the CBOW of today, says Festøy.

The gathering was hosted at Hotel Bristol in Oslo, Norway, on March 7th 2022.

We use cookies to ensure that we give you the best experience on our website. If you continue to use this site we will assume that you are happy with it.Ok